Home / Blog / Negative Thinking Patterns: All Or Nothing 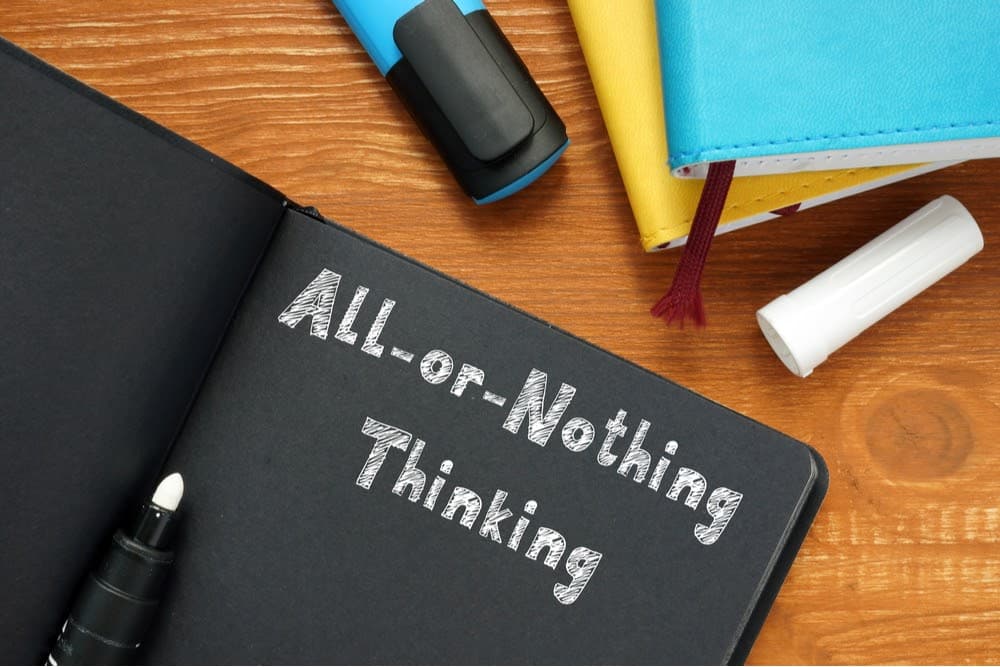 “You’re a rainbow my love,
Their sky is too clouded with darkness
For them to see your colors.”
–Pierre Alex Jeanty in his book of poems Her.

This article will help you understand some of the behaviors that the All or Nothing negative thought pattern can trigger in your teen. It will also provide some ways to cope with and decrease these negative thoughts. As you’ll learn later in this article, with a mind that has gotten used to negative thoughts, there is very little room for a variety of colors (thoughts) and no room for a spectrum of thinking.

An important disclaimer to remember as you read this article is that if you suspect that your teen is troubled and hurting, then this article will not be enough to help them. Instead, consider enrolling them in residential and/or therapeutic schools for troubled teens. At Help Your Teen now, we believe that awareness is helpful but cannot replace the help that your troubled teen should be getting.

The All of Nothing Negative Thinking Pattern

The All or Nothing thought pattern is the idea that either everything is going well or it’s all horrible. In this thought pattern, there’s no spectrum because everything is black and white. Having a spectrum in thinking means being able to see things on a larger scale. For example, here are examples of healthy thoughts that operate on a spectrum.

Examples of a healthy thought:

As you can see, the All or Negative thought pattern makes it difficult to think of alternative ways of viewing people and situations. So, if you’re suspecting that your teen is struggling with negative thoughts, keep an eye out for their use of absolute terms such as “never” and “always.”

The Harms of the All or Nothing Thought Pattern

Besides making your teen’s thoughts rigid and inflexible, this type of thought pattern is also detrimental in many ways.

1. It’s a Major Cause of Anxiety and Depression

In studies done on those with anxiety and depression, this negative thought pattern was often an underlying cause. For instance, those with anxiety may become more anxious if their thoughts are constantly telling them that life is either totally good or it’s all horrible. Teens with anxiety might start to isolate and fall deeper into their illness, blaming themselves for things not going well. This also goes for depression but with a more darker tone. We will say more about this later in this section.

2. It Can Lead to Aggression

In a study done on age, aggression, and all or nothing thought patterns, researchers found that the younger a person was and the more they were struggling with this thought pattern, the more likely that these participants would act on aggressive impulses. Specifically, these researchers write:

It Can Lead To Thoughts of Self-Harm and/or Suicide

As we mentioned before, a teen struggling with this thought pattern may fall deeper into depression. And as they come to view different challenges as an example of their failures, they may act on the negative thoughts that they’re having.

For example, the thought that “I didn’t get to date her so I’m not going to try dating again” can morph into “She doesn’t want to date me because there’s something wrong with me.” Constantly falling into this negative thought pattern, then, can be very detrimental. Your teen may engage in self-harm or even suicide as a way of coping with thoughts that are troublesome and disturbing.

If you suspect or see signs of any of these three issues, please consider getting your teen professional help.

2 Ways to Help Your Teen

Because negative thought patterns are deeply embedded in the brain and personality (sometimes leading to personality disorders like Borderline Personality Disorder), the following guidelines should be used as a way of helping your teen but not as a replacement for getting help from mental health professionals.

#1. Embracing Softness: Encourage Your Teen to Acknowledge The Negative Thought

A lot of times, people assume that if they can just ignore an uncomfortable thought, then that it will eventually go away on it’s own. But as many researchers have found, these uncomfortable thoughts only get louder. In the book, Mastering Adulthood: Go Beyond Adulting to Become an Emotional Grown-Up, Dr. Lara Fielding, a psychologist writes that one way of becoming emotionally mature is by acknowledging the negative or uncomfortable thought that you’re having. She also says that it’s important to be gentle with that thought.

Here are some ways to help your teen be softer with their negative thoughts: Have them ask questions about the all or nothing thought pattern. Where does this thought pattern come from? How have they learned to use this thought pattern as a coping mechanism? These questions will help them have a softer posture towards things that seem disturbing and harmful, thereby making them less scary.

#2: Encourage Them To Not Act on Their Thoughts or to Do The Opposite

That said, teaching your teen these two simple principles will be helpful in the long run. For more information on other negative thought patterns, keep an eye out for upcoming articles.