Home / Blog / How To Discipline A Teen That Doesn’t Care 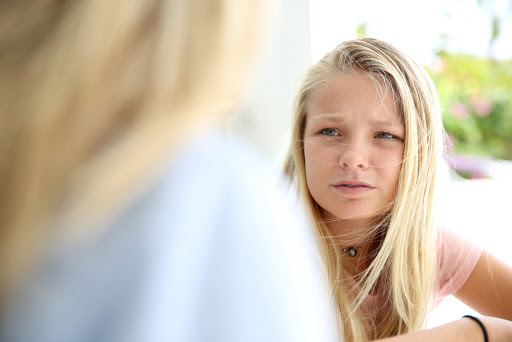 Let’s look at an imaginary but all-too-real scenario. You caught your teenager sneaking out of the house and, as a result, have confiscated their cell phone.

You’ve done everything a sensible parent can do, like reminding your adolescent why you need to know their whereabouts. You’ve also hit them right where it hurts, in that pocket-sized source of digital entertainment and social interaction so beloved by teens. But rather than showing remorse, your troubled teen says  “I don’t care.”

What’s a mom or dad to do in the face of such apparent apathy? The answer is to keep calm and parent on.

Don’t Take Your Teen At Their Literal Word

Adolescence is characterized by a tumultuous push-pull. While your maturing child still needs guidance, they crave an increasing amount of independence. So it stings teens acutely when they’re admonished or grounded because it makes them feel powerless.

While your kid may care very much about the fact they’re in trouble, saying “I don’t care” is a strategy to take back that lost power. It’s a way of saying, “You can’t hurt me.” In fact, it’s a pretty classic method for teens to reassert their sovereignty. Looking back on your younger years, you may well recall uttering a similar “So what?” to your own parents.

If your child presents an impassive front, consider responding in a way that’s emotionally neutral. You might say,  “That’s fine, but if you want to use your cell phone you need to obey our rules.”

Make Sure Depression Isn’t At Play

If your teen’s insistence they don’t care is part of an ongoing trend, you might want to take a closer look. Showing a lack of interest in everything, including pursuits that were once enjoyed, can be one of the symptoms of teen depression.

Given suicide is the third leading cause of death among US teens, potential depression is cause for concern. You may want to talk to your child or have them see a therapist to determine if they are experiencing a mental health issue. You should be especially vigilant if your teen is taking a medication that’s been associated with suicidal thoughts and actions among young people.

Hearing “I don’t care,” a phrase that’s almost synonymous with teenagers, isn’t necessarily cause for alarm. If you’re worried about your troubled teen’s state of mind, though, it’s better to be safe than sorry.

Focus On Behavioral Changes, Not Emotional Ones

It’s hard to keep frustration in check when a noncompliant child seems unfazed by discipline. It can be helpful, however, to remember the reason you created consequences for breaking household rules.

Discipline is about education. It’s end-goal is affecting behavioral changes, not getting revenge or spurring emotions in your child like remorse.

Let’s say you have a rule that your teen must speak respectfully to their siblings or lose access to a favorite video game. Your adolescent may not care about how rudeness affects their siblings or parents. What they’ll likely care about, though, is the fact they can’t play their game.

It’s a hard but necessary lesson that getting along–at home and in the world at large–is in their best interest.

A consequence needs to involve something that’s significant to your teen. It can take any form, with a few caveats.

You should never take away your child’s chance to celebrate unforgettable milestones. If you ban your child from attending prom, for instance, they’re more likely to cherish a lifelong bitterness about the missed opportunity rather than learn a lesson.

It’s been found that involvement in extracurricular activities helps teens be more engaged in school. So it’s also inadvisable to punish your kid by refusing to let them participate in sports, theatre or other after-school pursuits.

Reach Out If You Need Further Help

Is your adolescent undeterred by discipline and exhibiting behavior that threatens to wreck their future? Does their “I don’t care” attitude point to deep-seated issues? If your adolescent is in crisis and you’re in over your head, consider sending them to a residential treatment center or therapeutic boarding school for troubled teens. These offer a safe harbor where youths can untangle the issues holding them back while receiving the supervision, therapy and academic support they need to move forward to a brighter future.

You can contact us at Help Your Teen Now for professional advice on which program might best help your child. Because we are parents ourselves who want to help as many teens and their families as possible, all of our services are free.  If you’d like to discuss some of your options, we’re ready to help.